Your design is underway, do you finish it?

Descended from the Queen (DftQ) is a card-based story-building game. It was born from Alex Roberts’ original creation, For the Queen (FtQ) in 2019 and is both an incredibly immersive and accessible character worldbuilding experience. For the Queen has inspired many others to create their own frameworks and stories  that cover a wide range of settings and experiences.

In this guide, I’ll cover what experience the system projects, how it approaches emotional narrative design, and why. I’ll provide examples of existing hacks of For the Queen and some starting principles to create your own story game that’s Descended from the Queen. As a student of the game system, I’m limited to my experience and my interpretation of it. I hope you are able to take something away and be able to use it for your own. As a student of the game system, this is my interpretation of it. And I hope you’re able to iterate on it and make it your own.

This document is primarily intended for inspiration and general understanding. As pnoyXP isn’t Alex Roberts, the original designer, these are their interpretations and reflect their understanding and biases. This is by no means meant to be the “right” approach, just a focused one. This is also intended to be a reference if you’re stuck with your own design.

Get creative, get experimenting, and have fun!

Descendants of the Queen PDF 588 kB

I've played one Descended from the Queen game, The Wizard's Tower, and quite enjoyed it even as a solo experience (which involved moving the final question card a bit up in the draw deck). I feel that this guide describes well the essence and soul of a game that uses this framework, and gives good advice for designers thinking about creating a Descended from the Queen game.

One particular detail I liked is the examples given from a few Descended from the Queen game to show what can be done with the framework, from varying the theme, varying the "queen", and varying the final goal(s).

Also the last section is more general advice about playtesting, though it has some specificity to the Descended from the Queen framework, which I feel is extremely valuable for those starting out in game design. I've known board game designers before, and these are similar principles that work there, too. 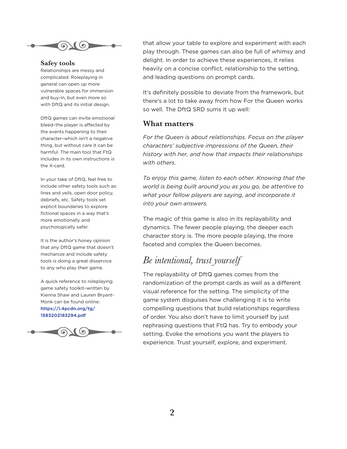